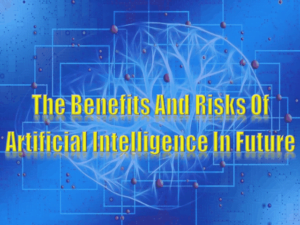 What are benefits and risks of the Artificial Intelligence for mankind? Because, Artificial Intelligence is no longer just a concept from science fiction movies. And even though it is not as developed or dangerous as its Hollywood counterpart; it is slowly finding its way into everyday lives. For instance, we have quickly grown accustomed to digital assistants such as Siri or Alexa. Autonomous vehicles, while still not quite there yet, are becoming more and more common. At the core of all of these technologies is Artificial Intelligence.

So, despite not being perfect at the moment, AI is used to transform businesses. According to research done by Adobe, 15% of enterprises are using AI, and 31% are planning on using it in the next 12 months. All of this sounds great, and it is, but as with any new technological and scientific breakthrough;, there are just as many cons as there are cons. So, in order to figure what are the benefits and risks of Artificial Intelligence? Let’s consider some of the implications of this great new tool we have on our hands.

5 Benefits And Risks Of The Artificial Intelligence

Since Artificial Intelligence will be used for anything from driving to dissertation assistance, it is very likely to replace some of the current workforce. This means that millions of people are expected to lose their jobs permanently. They will need to receive training in order to be able to do something else. Just like in the futuristic books and shows from the 50s, robots are doing our job; but instead of enjoying the fruits of our labor, we are left with nothing.

However, there will definitely be cases where Artificial Intelligence and humans will need to work side by side; which means that AI will create new jobs as well. They will be different, since they will require workers which are highly educated. Our education system will need to provide an answer for this upcoming shift.

Also Read: What Are The Risks of AI For The Human World?

Up until now, establishing trust in new technologies used to be the result of our understanding of them; as well as their reliability. But in the case of Artificial Intelligence, building trust is going to become a huge issue; since it works like a black box. Even though if Artificial Intelligence has made the right decision; we don’t exactly understand the decision-making process behind it, as pointed out by numerous dissertation services.

People should have the right to know whether a decision has been made for them by a machine; as well as an explanation on how it arrived at that decision. Once Artificial Intelligence starts making decisions that are correct nearly all the time, not many people will be asking questions; but until that happens, there will be plenty of hurdles we will have to overcome.

3. Too Smart for Our Own Good

Artificial Intelligence will be able to work faster and harder than any human; which means that getting an essay on time or making a complex decision will become a routine. AI will most likely be able to perform difficult and time-consuming tasks; such as restoring, improvising, and colorizing footage or long-distance driving and flying. But, what happens when AI becomes smarter and more powerful than humans?

We’ve all seen movies from the Terminator and Matrix franchises, in which machines overthrow humanity. If we’re not careful, it’s not that far-fetched of a scenario. Artificial Intelligence doesn’t even have to be smarter; it already has the edge since it doesn’t have to eat, sleep, or take breaks. And what if it gets to that level where it’s able to create its very own Artificial Intelligence; which we won’t be able to understand at all. All of these scenarios we must to tak into account; when we design AI systems to make them not just helpful, but safe as well.

In theory, computers and machines make decisions based on cold hard data and facts; there is no emotions and bias involved, which is the case with essay writers uk and their work. But, in reality, Artificial Intelligence systems can be very biased; depending on who build them or the quality of the data they are trained on. In other words, bad data may contain racial, gender, social, ethnic, or other biases, which could affect Artificial Intelligence decisions. Therefore, unbiased data and transparent algorithm will have to become mandatory.

Also Read: 6 Steps Of User Verification Through KYC: It’s Not as Difficult as You Think

Once Artificial Intelligence becomes powerful enough; it will take on decisions and tasks that are way to demanding for human being; such as the aforementioned long-distance driving or flying. Theoretically, it would make travelling much safer. But what if there was an accident? Who would be accountable? You can put AI on trial, so who is to blame then? The company who built AI or the programmer who trained it? Regulations will have to keep up with all these new aspects of both technology and humanity.

So, Artificial Intelligence have benefits and risks as well. Well, as in the case of every new technology, it’s a bit of both. Perhaps we are to treat it like nuclear energy, which can be very efficient and clean. But if one small mistake was happen, it would spell disaster of epic proportions. Ultimately, it’s up to us.

Must Read: Top 6 AI and ML Tools For Professionals

Author Bio: Aziz Nicleson is an experienced journalist working a for a London-based magazine “Shop&Buy”. Apart from journalism, he has a passion for mini-tennis and he is the author of a novel “His Heart”.

Images by Gerd Altmann from Pixabay