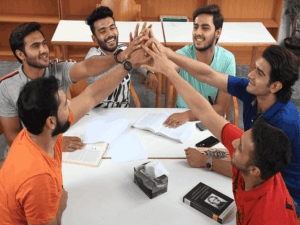 So even if you are not looking to bet much; it is essential to be aware of how bets are set up and the ways that you can judge them for yourself.

What are College Basketball Straight Bets?

Straight bets are the backbone of basically any college basketball wager. In general, they focus around the point-spread, a type of bet that uses a handicap to make each team equally beneficial.

If a team is more likely to lose, betting on them comes with some advantages, whereas teams that win often might have some restrictions over how you bet.

College basketball straight bets are the most straightforward and fairest way to bet on college basketball. The odds might not always be in your favor, but bookies do their best to balance out the odds so that the underdogs can still feel satisfied if they pull off a last-minute victory.

But what are point-spreads, and how do they work?

Let us say you have Team A and Team B, two college basketball teams that will be playing a game against one another. Team A might be the clearly superior option, either due to their players, their experience, or just because they are the fan-favorite and are more likely to win overall.

This would make it almost pointless to bet on Team B because they are less likely to win.

This adds and subtracts points from their final total at the end of the game. For example, in this case, Team A would need to beat Team B by at least ten extra points. If they won by only ten or fewer points, they technically won the game, but bets on them would count as a loss.

On the other hand, Team B can have winning bets even if they lose. They get a 10-point margin in their favor, so as long as they lose by up to about nine points, the extra ten will apply; and they will be considered the winner for the purposes of the bet.

This means that bets can be successful even if the underdog team is not and can fail even if the champion team wins. It is a way to make sure that people who bet on losing teams have a chance to earn something if the win is a very close one.

Since either side is technically the winner according to the bets (even if Team A won the entire game); the bets are refunded to whoever placed them; and it counts as a draw with no winners.

In short, the bet is not being placed on the game; since it does not matter who wins.

It is being placed on the ability of the teams to keep up with one another; if the underdog team can stick near the leading team within the margin, they might still lose by five points, but those five points could win the bets placed on them.

Juice is the commission placed on most college basketball straight bets; which is how the bookies make their money.

For example, if you bet $100, you might need to pay $110, with the $10 going to the bookie. This is still less than many other bet types, meaning that this can be quite an effective way to bet without feeling like you are giving too much money to the person setting the odds.

Keep in mind that odds are not always accurate and do not always reflect the state of the game, especially if the two teams have never played against one another before.

An underdog team will not always be the one that loses, and the fan-favorite can still end up being the loser.